Boys Over Flowers Wiki
Register
Don't have an account?
Sign In
Advertisement
in: A to Z, Music, Singles, Hana Yori Dango

"WISH" (, "WISH") is a single by the Japanese band, Arashi. The single was released on November 16, 2005 on the label, J Storm. "Ichioku no Hoshi" and an audio commentary were included on the regular edition of the single.

It was used as the opening song for the Hana Yori Dango drama, which starred Arashi member, Jun Matsumoto as Tsukasa Domyoji.

"Wish" was released in two editions, Regular and Limited on November 16, 2005. It served as the opening theme of Hana Yori Dango (2005), which starred Jun Matsumoto as the lead character.[1] The regular edition featured a second song, "Ichioku No Hoshi," and a thirty-eight minute audio commentary, titled "Secret Talk." In the commentary, it is revealed that Matsumoto accepted the part in Hana Yori Dango so Arashi could release a new single.[2] The limited edition included a third song, "Futari no Kinenbi."[3] 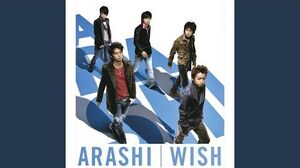