Boys Over Flowers Wiki
Register
Don't have an account?
Sign In
Advertisement
in: A to Z, Media, Television dramas, Meteor Garden (2018)

Boys Over Flowers by
Yoko Kamio

Meteor Garden (Chinese: 流星花园; pinyin: Liúxīng Huāyuán) is a Chinese remake of the 2001 series of the same name. It is also an adaptation of Yoko Kamio's manga Boys Over Flowers.[4][5] The series was first announced in April 2017 by Angie Chai, who produced the original Meteor Garden.[6] It was directed by Lin He Long.[7]

The series stars Shen Yue as Dong Shan Cai with Dylan Wang, Darren Chen, Liang Jing Kang, and Caesar Wu as the F4.[8] Meteor Garden premiered on July 9, 2018 on Hunan Television.[9] It was aired from Monday to Wednesday until its conclusion on August 29, 2018.[10][11] The series was broadcast globally by Netflix as one of their "Originals."[12]

Shan Cai (Yue) begins attending Ming De University and has her life turned upside down when she stands up to the arrogant leader of the F4, Dao Ming Si (Wang). He develops feelings for her, which makes things complicated since she has a crush on his friend, Hua Ze Lei (Chen). Shan Cai and Si then experience several ups-and-downs together.

Eighteen-year-old Dong Shan Cai (Shen Yue) is a nutrition major at Ming De University. One day, her friend Li Zhen (Dong Xin) accidentally drops a cake on Dao Ming Si (Dylan Wang). He is the leader the F4, a talented group of bridge players which also includes Hua Ze Lei (Darren Chen), Feng Mei Zuo (Liang Jing Kang), and Xi Men Yan (Caesar Wu). Shan Cai stands up to him for not accepting her friend's apology. Si sends her a Joker card and begins bullying her. Later, he orders food from her family's business and throws it at her after she calls him a "parasite". Outside, Lei happens by in time to save Shan Cai from being assaulted by two guys. Finally having enough, Shan Cai confronts Si at school. She kicks him in the face and declares that she will not be bullied by anyone.[13]

Having become infatuated with Shan Cai, Si later asks her to be his girlfriend. She rejects him, calling him a "narcissist." Two days later, Lei's first love Teng Tang Jing (Sun Yi Han) comes back to Shanghai. Depressed, Shan Cai spends more time with her best friend, Chen Qing He (Liu Yin Hao). Si becomes jealous and bullies Shan Cai again. Lei swoops in to protect her, which angers Si who then ends their friendship.[14] Later, Shan Cai develops a fever due to stress. Si visits her at her home and invites her to Hawaii for their vacation. She refuses, deciding to go with Qing He to Sanya instead. There they are met by Si's yacht. Shan Cai's vacation goes from bad to worse. First, she accidentally kisses Si and later she witnesses Lei confessing his love to Jing. She is cheered up a bit by Si on the final night.[15]

Back at school, Shan Cai meets Lei on the school's rooftop. Jiang Bai He (Wang Zi Zhen) and Li Xin Hui (An Zi Yi) secretly tape them and show the video to Si. Shan Cai later returns to the roof, where she finds an angry Si. He grabs her wrists and forcibly kisses her. Si finally stops when she starts to cry. Shan Cai later attends Jing's birthday party, where she avoids seeing Si.[16] Jing surprises everyone by announcing her plans to return to France. Lei becomes depressed, which distresses Shan Cai who tries to convince Jing to stay for Lei's sake. He happens to overhear and becomes angry. At the airport, after the others say goodbye to Jing, Lei suddenly shows up to reveal that he is going after her. He thanks Shan Cai for encouraging him. Si asks Shan Cai on a date while watching the planes but she cannot hear him.[17]

After losing a card game to Si, he orders Shan Cai to treat him to dinner. She arrives hours late and the two become trapped all night in an elevator while searching for shelter from the rain. The next day, rumors circulate that they are dating leading Bai He and Xin Hui to invite Shan Cai and Li Zhen dancing. She meets Thomas (Blake Abbie), whom she mistakes for Lei. The next morning, she wakes up in a hotel.[18] Thomas later explains that nothing happened between them. However, a photo of them in bed is posted. After Si sees it, Shan Cai asks him to trust her but he does not believe her at first. The next day, Si goes to her work and saves her from being assaulted by two guys. Xi Men and Mei Zuo later discover that Li Zhen was behind posting the photo. Shan Cai is hurt that her friend would stab her in the back.[19]

In April 2017, producer Angie Chai announced her plans to remake Meteor Garden, which she produced in 2001. Prior to the announcement, Barbie Hsu had hinted at the news on her Weibo account.[6] Chai voiced her intentions on making the remake a "fuller—and flashier–adaptation of the books."[5] The drama was budgeted at 720 million New Taiwan dollars (about US$24 million) with 15 million per episode, about thirty times higher than the original Meteor Garden.[6]

A casting call was announced on social media in June 2017 with a video and the topic tag, "#FindingF4#."[24] On November 7, 2017, the actors playing the F4 were revealed, namely Dylan Wang (Dao Ming Si), Darren Chen (Hua Ze Lei), Liang Jing Kang (Feng Mei Zuo), and Caesar Wu (Xi Men Yan). The announcement was made through a photo spread in Harper's Bazaar China.[25][26] Shen Yue's role as the female lead, Dong Shan Cai, was unveiled at a press conference in Shanghai on November 9.[8]

In February 2018, director Lin He Long was announced as the replacement for Xu Fu Xiang, who left due to creative differences. Lin previously worked with Chai on several series, including Devil Beside You and Corner with Love.[7] Filming in China was soon concluded and the production began shooting on location in London, England.[27][28] Filming officially concluded on March 22 and Chai began the post-production process shortly after.[29]

Meteor Garden was broadcast on Hunan Television in China, starting on July 9, 2018. Two episodes aired a day from Monday to Wednesday at 22:00. The series is also available on Hunan's streaming service, Mango TV.[10] Netflix licensed the series globally,[30] excluding the Philippines, Thailand, and Indonesia.[31] The first six episodes premiered on Netflix on July 13, 2018.[32]

The actors playing the F4 first appeared in Harper's Bazaar China in November 2017, which also announced their casting.[25] The same month, the actors were featured on the cover of Men's Uno Young.[33] Shen joined Wang, Chen, Liang, and Wu on the cover of Elle China's online edition of their February 2018 issue. They filmed an short video for SuperElle in collaboration with Chanel.[34] The F4 actors also appeared in InStyle in February 2018.[35] Promotional photos for the main cast were officially revealed in mid-February on Weibo.[36] Several cast members of Meteor Garden appeared in a Men's Uno Young! collaboration in April.[37]

A trailer and a new poster for Meteor Garden were released on May 24, 2018.[38] Two days later, Shen, Wang, Chen, Wu, and Liang appeared on the variety show, Happy Camp.[39] The final poster, bearing the July 9th premiere date, was unveiled in late June.[10] On July 5, a press conference was held for the official launch of Meteor Garden.[40] Before and during the broadcast of Meteor Garden, the cast made several appearances on the variety show, Happy Camp.[41] The cast appeared on PhantaCity in a fairytale-esque short directed by Kabir Khan on August 24, 2018.[42]

Harlem Yu's "Qing Fei De Yi" ("Can't Help Falling for You"), the opening theme of the original series, is featured in the series.[45] Penny Tai also rearranged "Ni Yao De Ai" ("The Love You Want"), which previously served as the ending for the original series. Tai performed two different versions for the remake.[46] 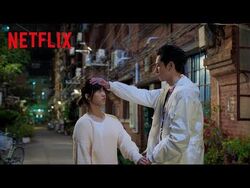 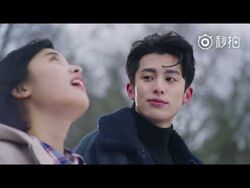 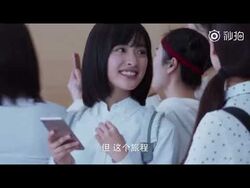 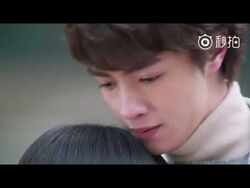