Boys Over Flowers Wiki
Register
Don't have an account?
Sign In
Advertisement
in: A to Z, Media, Television dramas, Hana Yori Dango

"Love So Sweet" by Arashi

Staff members Yasuharu Ishii, Mikio Satake, and Katsuaki Setoguchi all returned for the second series. The drama was produced for TBS Television.[5] It was released on DVD on July 11, 2007.[6] The drama was followed by Hana Yori Dango Final (2008)[7] and Hana Nochi Hare (2018).[8] A special edition of Returns aired in April 2016.[9]

Tsukushi Makino (Inoue) travels to New York to reunite with Tsukasa Domyoji (Matsumoto), only to have him reject her. Things are made more complicated, when his mother announces his engagement to Shigeru Okawahara (Natsuki Kato). She ends up becoming good friends with Tsukushi, who continues wrestling with her feelings for Tsukasa.

One year after Tsukushi Makino (Mao Inoue) and Tsukasa Domyoji (Jun Matsumoto) became a couple, the F4 have since graduated from Eitoku Academy and Tsukasa has started ignoring Tsukushi's calls. Eventually she flies to New York to see him. Their friends Rui Hanazawa (Shun Oguri), Sojiro Nishikado (Shota Matsuda), and Akira Mimasaka (Tsuyoshi Abe) arrive soon after to lend their support to her. Tsukasa gives no explanation for his strange behavior and coldly rejects Tsukushi. She returns home defeated. However, not long after, she receives an invitation to Tsukasa's birthday party. Tsukushi attends and looks on in shock when Tsukasa's mother Kaede Domyoji (Mariko Kaga) announces his engagement to heiress Shigeru Okawahara (Natsuki Kato).[10]

Shigeru falls in love with Tsukasa and befriends Tsukushi. She bombards Tsukushi with questions about Tsukasa, not realizing that Tsukushi still has feelings for him. Tsukushi goes to meet with Tsukasa, but leaves as soon as she sees him kissing Shigeru.[11] Opposed to the engagement at first, Tsukasa reluctantly asks Shigeru to become his girlfriend after he is unable to clear the misunderstanding with Tsukushi. Meanwhile, Tsukushi works hard at two jobs and studying to get into law school, so much so that she passes out from exhaustion. At dinner with Shigeru's parents, Nishida (David Ito), Kaede's secretary, informs Tsukasa that Tsukushi has been hospitalized. Tsukasa immediately starts running toward the hospital.[12]

Tsukasa leaves upon seeing Rui, who stays by her side all night. In the morning, he confesses that he "might" like her and kisses her. Tsukushi does not take him seriously. At home, her brother Susumu (Satoshi Tomiura) informs her that their mother (Mako Ishino) and father (Susumu Kobayashi) have left to work as fishermen. The siblings find a new apartment and Tsukasa moves in next door.[13] Later, Tsukasa confronts Rui about kissing Tsukushi. His reply causes Tsukasa to explode with rage. After Tsukushi's an entrance exam, Rui treats her to lunch. He confesses his feelings again and she realizes that he is serious. In the meantime, Tsukasa grows closer to Susumu as he helps him with first love. Susumu, in turn, helps Tsukasa acknowledge that he still loves Tsukushi.[14]

Nishida informs Tsukushi about the tragic events between Tsukasa and his coworker Ken Uchida (Shingo Tsurumi), which were the cause of Tsukasa's cold behavior in New York. Later, the floor of Tsukushi's apartment collapses. Susumu goes to live with their parents and Tsubaki Domyoji (Nanako Matsushima) invites Tsukushi to stays at the Domyojis mansion.[15] Tsukushi agrees to stay there, but only if she can work as a maid. The head servant Tama (Sumie Sasaki) takes her under her wing. Meanwhile, Yuki Matsuoka (Aki Nishihara) and Sojiro have both gone missing. Sojiro visits his first love Sara Hinata (Shihori Kanjiya), only to find that she is now engaged. Back in Tokyo, Yuki, who has been searching tirelessly for a week, shows Sojiro proof that Sara had loved him once.[16]

Deciding that she wants to be with Tsukasa, Tsukushi tells Rui that she does not feel the same. He refuses to give up until Tsukasa sincerely begs him to. Next, Tsukasa resolves to end his engagement at a dinner with Shigeru and her parents. Shigeru winds up ending it instead. At the airport, Tsukushi tearfully says goodbye to Shigeru, before she goes back to New York.[17] Domyoji Group's failed merger with Okawahara Corporation creates a major ripple effect on Japan's economy. Tsukushi feels responsible and decides to end her relationship with Tsukasa, after visiting his mother. That night, Tsukushi breaks up with Tsukasa in the rain. She then boards a train to go live with her parents and brother.[18]

Tsukasa suddenly see Ken, who confesses that Kaede had him fake his death. He then decides to go after Tsukushi. At the village, Tsukasa hurts himself while protecting Susumu. He is hospitalized and it soon becomes apparent that he is suffering from memory loss, having forgotten only Tsukushi. Meanwhile, Umi Nakajima (Erika Toda), another patient, becomes closer to Tsukasa.[19] The F4 organize a skiing trip and Umi tags along with Tsukasa. He figures out that she is not the one he forgot, and out of anger Umi tricks Tsukushi into going out during a blizzard. Tsukasa rescues Tsukushi and takes her to a cabin. There he finally remembers her. After graduating, Tsukushi makes her way to prom, where Tsukasa proposes to her in front of everyone. She says yes and believes now that they will be together forever.[20]

In August 2006, a sequel to Hana Yori Dango (2005) was announced. Viewer comments from the program's web page were taken into account when deciding which parts of the manga to cover.[25][26] Mao Inoue and Jun Matsumoto returned from the previous series along with costars Shun Oguri, Shota Matsuda, and Tsuyoshi Abe. Megumi Sato's role was reduced to a cameo, while Natsuki Kato was cast as a regular. Toma Ikuta was also cast as a guest star for the series' two-hour premiere.[27]

Filming commenced the following October.[28] The cast of Hana Yori Dango Returns flew to New York City on November 29 to film on location, including Cafe Habana.[29] They returned to Japan for the production announcement on December 5.[30] Eitoku's prom was filmed at Nippon Budokan on March 9, 2007.[31]

In December 2021, to celebrate the release of 99.9% Keiji Senmon Bengoshi: The Movie, the Japanese streaming services Paravi, TVer, and TBS Free made Hana Yori Dango Returns and its first season available for free until March 2022.[37] It was added to Rakuten Viki in April 2022 along with the first season.[38]

The box-set of Hana Yori Dango Returns received a first shipment order of 62,500 sets.[39] The series was released in a box set on July 11, 2007 by TC Entertainment.[40] It was re-released in blu-ray format on August 6, 2008.[41] Both include a variety of bonus features, such as a director's cut for the first and last episodes.

Kousuke Yamashita, who had also worked on the Hana Yori Dango soundtrack, composed the background music for Returns. The soundtrack was released by Seikodo on February 28, 2007. It consisted entirely of Yamashita's compositions.[44]

"Love So Sweet" by Arashi, of which Jun Matsumoto is a member, served as the theme song for the drama. The song is certified Double Platinum by Recording Industry Association of Japan.[45] Utada Hikaru's "Flavor of Life" was used as an insert song for the drama. It was downloaded over three million times.[46][47]

A number of items for Hana Yori Dango Returns were sold by TBS, including a Kewpie phone chain originally released for the first series.[48] Additionally, a replica of the Saturn necklace heavily featured in the drama was released. It was sold for ¥38,000.[49][50] Other items sold were a knit hat worn by Mao Inoue in the first episode, various hair pins inspired by Takako Kato's character, and stuff animals of Sanrio characters.[48]

Hana Yori Dango Returns had higher ratings than its predecessor with an average viewership rating of 21.57%.[24] It peaked at 27.6% for the finale.[51] The drama topped Oricon's viewer satisfaction survey for 2007's winter season.[52][53] It ultimately ranked number one for the end of year survey.[54][55]

The overall popularity of the two dramas led to a film sequel, which wrapped up the series.[56] In 2018, the enduring popularity of Hana Yori Dango led to a spin-off, titled Hana Nochi Hare, adapted from Yoko Kamio's manga was released.[57] It featured several cameos, including Matsumoto, Oguri, Matsuda, David Ito, and Sumie Sasaki.[58] 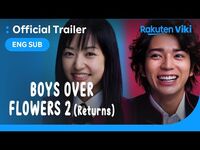