Boys Over Flowers Wiki
Register
Don't have an account?
Sign In
Advertisement
in: A to Z, Real events

Sweets Paradise provided an all-you-can-eat menu as well as a collaboration menu, which were items inspired by the F4 characters. Those who ordered from the latter menu received either limited edition F4 stickers or coasters.[3] The F4-inspired menu was changed to feature new items on November 21, 2015.[4]

On October 5, 2015, Voltage announced a collaboration with Sweets Paradise for a café inspired by their Hana Yori Dango: F4 and First Kiss.[5] It opened on October 9 at Sweets Paradise in Shibuya, Tokyo. Akihiro Yokota (, Akihiro Yokota), the then president of Voltage,[6] and Kazuyuki Masuda (, Kazuyuki Masuda), then part of Shueisha's digital division,[7] spoke at the opening.[8] Daisuke Yamada (, Daisuke Yamada), Voltage senior manager, introduced and answered questions about the app and café.[9][10] 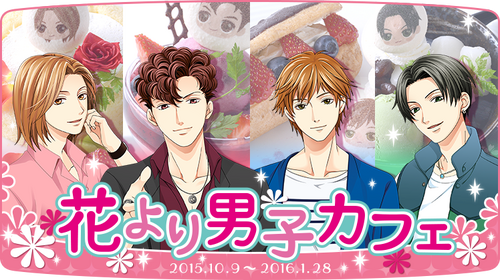 Four illustrations of the F4 members were specially drawn by Yoko Kamio and placed in the café. She finished the photos the day before the opening on October 8, 2015.[8][11]

Two 3-D art exhibits were featured at the event, including Tsukasa Domyoji doing a popular photo trend "Ago-kui"[12] and one of Rui Hanazawa on the famous stairwell were both available for fans to pose and take pictures with. 2-D photos of Sojiro Nishikado and Akira Mimasaka as well as a life-size panel of the F4 were also available.[1]

Users were available to enter a lottery after downloading the game.[13] The prizes were the following:

Voltage also held a campaign on Twitter from October 9, 2015 to January 28, 2016,[14] where a user could follow Voltage and retweet them for the chance to win limousine tickets.[3] Additionally, people making a purchase from the collaboration menu would receive limited edition F4 stickers and coasters.[15]