Boys Over Flowers Wiki
Register
Don't have an account?
Sign In
Advertisement
in: A to Z, Media, Television dramas, Hana Yori Dango

Hana Yori Dango (, Hana Yori Dango) is a live-action Japanese drama based on Yoko Kamio's manga of the same name. It was produced by Katsuaki Setoguchi for TBS, and directed primarily by Yasuharu Ishii.[1] Mao Inoue, Jun Matsumoto, Shun Oguri, Shota Matsuda, and Tsuyoshi Abe stars in the drama as Tsukushi Makino and the F4.[2]

Tsukushi (Inoue), a normal girl, attends Eitoku Academy, where the F4's word is law. Life takes a turn for her when the F4's leader, Tsukasa Domyoji (Matsumoto) begins to like her. Tsukushi falls for his best friend Rui Hanazawa (Oguri), who is in love with his childhood friend. Tsukushi and Tsukasa grow closer, after Rui goes to France.

Tsukushi Makino (Mao Inoue), the daughter of a lower-middle class family, is a second-year at Eitoku Academy, a school for Japan's upper class. The F4 have the run of the school and enjoy bullying other students, sending out red cards to mark their targets. The group is led by Domyoji Group heir, Tsukasa Domyoji (Jun Matsumoto) and includes his childhood friends, Rui Hanazawa (Shun Oguri), Sojiro Nishikado (Shota Matsuda), and Akira Mimasaka (Tsuyoshi Abe). One day, Tsukushi's friend Sakurako Sanjo (Megumi Sato) angers Tsukasa. When Tsukushi stands up to him, she is made the target instead. She endures the bullying until Tsukasa destroys her lunch, which was lovingly made by her parents. Tsukushi punches Tsukasa and declares war on him.[9]

Tsukasa takes an interest in Tsukushi and attempts to impress her, which fails. Tsukushi starts to fall for Rui, who is waiting for his first love to return from France. A welcoming party is held for Shizuka Todo (Mayumi Sada), Rui's long-awaited love. Tsukushi, invited by Yuriko Asai (Saki) and her cronies, Minako Yamano (Emiko Matsuoka) and Erika Ayuhara (Aki Fukada), arrives at the party. The girls bully Tsukushi until Rui and Shizuka step in to save her.[10] A few days later, Shizuka announces her departure back to France. Tsukushi begs her to stay for Rui's sake, but Shizuka stands by her reasons for leaving. At the airport, Rui makes the decision to follow Shizuka and Tsukushi says goodbye to her first love. The next day, Tsukasa asks Tsukushi on a date and she contemplates whether to go or not.[11]

Tsukushi eventually goes to meet Tsukasa, who has been waiting in the rain for several hours. On their way to a café, the two become stuck in a broken elevator and spend the night together. A photo of them from that morning circulates around school, leading everyone to believe they are dating. Tsukushi later goes to a club with her new school friends, where she meets a guy. She wakes up the next day at a hotel with no memory of what happened.[12] Photos of her with that guy are posted around school. Tsukushi tries to tell Tsukasa that she was framed, but he does not believe her. Later, Tsukushi is kidnapped by Sakurako. She calls Tsukasa there and has her men beat him severely, but leaves unsatisfied. Afterwards, Tsukasa confesses his feelings to Tsukushi.[13]

Rui returns from France and Tsukasa begins acting like he and Tsukushi are dating. Tsukasa's sister, Tsubaki Domyoji (Nanako Matsushima) suggests for Tsukushi to take Tsukasa on a double date. Tsukushi and Tsukasa meet up with her friend, Yuki Matsuoka (Aki Nishihara) and her boyfriend. Yuki's boyfriend irritates Tsukasa several times, before Tsukasa punches him. Tsukasa refuses to tell Tsukushi what happened. Tsukushi runs into Rui, who hugs her.[14] Tsukasa sees them together and kicks Rui out of the F4. That weekend, Tsukasa follows Tsukushi and Rui on a date. Tsukushi later meets up with Yuki and they see her boyfriend with another girl. Yuki runs away and Sojiro finds her. He helps Yuki get revenge by embarrassing her ex. Tsukushi catches up with them and Yuki's ex reveals what he said to Tsukasa.[15]

After apologizing to Tsukasa, Tsukushi's family and friends find themselves in dire straits. Tsukushi stands up to Tsukasa's mother, Kaede Domyoji (Mariko Kaga), who is behind her troubles. Tsukasa and Tsubaki suggest that Tsukushi enter the Teen of Japan in order to win the prize money to help her family and friends. Tsukushi agrees and begins training for the contest.[16] She manages to make it to the final round against Tsukasa's fiancée, Ayano Kurimaki (Ayana Sakai). Meanwhile, Tsukasa promises his mother that he will go with her to New York if Tsukushi loses. When Ayano wins, he decides to leave without saying goodbye. Tsukushi hears about him leaving from Rui, who encourages her to "go after" him. At the last second, she meets Tsukasa at the airport. Tsukushi admits that she loves him and they kiss.[17]

In late August 2005, producer Katsuaki Setoguchi was asked to create a drama to fill in the autumn schedule.[30] He decided to adapt Yoko Kamio's Boys Over Flowers after finding the complete edition in a bookstore.[31] Hana Yori Dango was the second television drama adapted from it after Taiwan's Meteor Garden (2001).[32] Production was announced in early September 2005.[33] Mao Inoue and Arashi's Jun Matsumoto were cast as the series' leads, Tsukushi Makino and Tsukasa Domyoji along with Shun Oguri, Shota Matsuda, and Tsuyoshi Abe as the F4. Inoue was then best known her performance in the Kids War series as a child actress.[34] A press conference for Hana Yori Dango was held on October 13, 2005. It was attended by the main actors and Setoguchi.[35][36]

To celebrate the release of 99.9% Keiji Senmon Bengoshi: The Movie in December 2021, the Japanese streaming services Paravi, TVer, and TBS Free made Hana Yori Dango and its second season available for free until March 2022.[42] In April 2022, the series became available on Rakuten Viki for North and South America, Europe, Australia, etc.[43]

The soundtrack to Hana Yori Dango was released by Sony Music on December 7, 2005.[47] It consists of background music from the drama, all of which was arranged and composed by Kousuke Yamashita. Original author Yoko Kamio drew the cover art for the soundtrack.[48]

TBS released only a single item for Hana Yori Dango, a Kewpie doll on a phone chain modeled after the heroine, Tsukushi. It was released in December 2005, shortly before the series' end.[52] The item cost ¥1,806 and continued being sold when more merchandise for Returns[53] and Final were released.[54]

TBS executives did not expect Hana Yori Dango to do very well, predicting it would receive a 5% viewership rating.[30] It ended up being a hit with an average 19.76% rating.[55] The series home page had 170 million page views, which was the highest for the station at the time. The original manga was also reprinted due to the drama's success.[56] Following the drama's popularity, production on a sequel began in mid-2006.[57] A film sequel, which served as the series' conclusion, was also produced.[58] 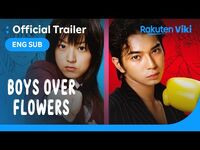