In August 2015, Ririka Kato's casting as Tsukushi Makino with Yuya Matsushita, Jin Shirasu, Ryuji Kamiyama, and Mackenyu as the F4 were announced.[4] Further casting, including Nami Tamaki and Nao Furuhata, were revealed in September.[5] A South Korean version premiered in 2017 featuring a rotating cast with Suzuki returning to direct.[6]

The musical follows Tsukushi (Kato), a regular student coping with the rampant bullying at Eitoku Academy. The school is controlled by the F4, a clique led by Tsukasa Domyoji (Matsushita). 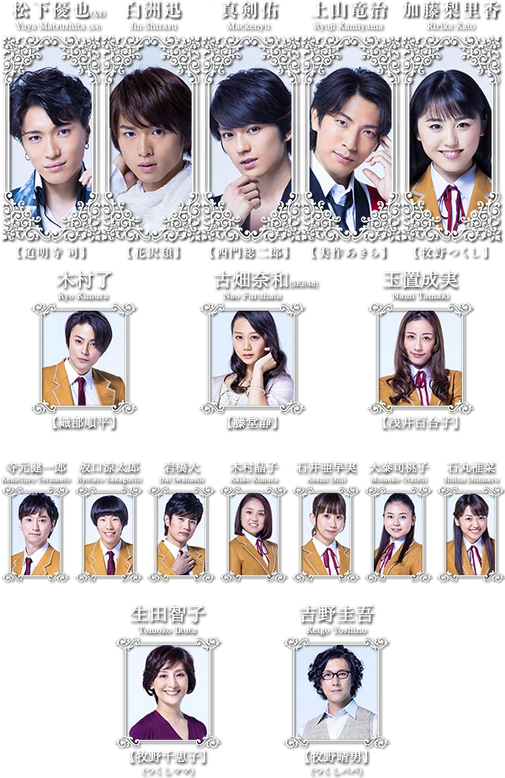 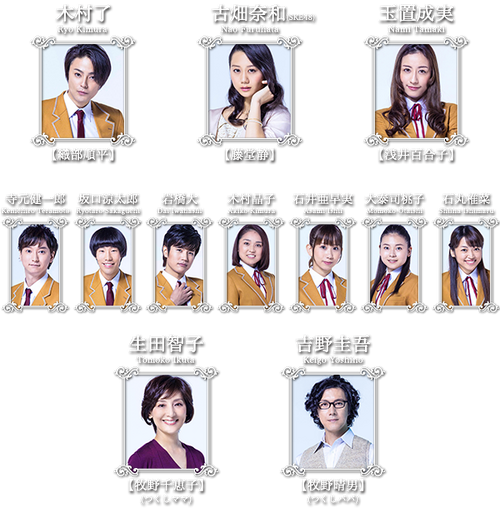 A musical adaptation of Boys Over Flowers was first announced in Margaret in April 2015.[17] Auditions for an open casting call for the role of Tsukushi Makino were held throughout April and May 2015. Applicants were required to be within the ages of 15 to 25, and have a good singing voice. Applications were open to both amateurs and professionals.[18] On August 19, it was announced that Ririka Kato had won the lead role out of 3,000 participants. Yuya Matsushita, Jin Shirasu, Mackenyu, and Ryuji Kamiyama were cast opposite Kato as the F4.[4] On September 18, the supporting cast, namely Ryo Kimura, Nao Furuhata, Nami Tamaki, Tomoko Ikuta, and Keigo Yoshino, were revealed.[19][5]

On October 23, 2015, a press conference was broadcast live on the streaming service, NicoNico. The main and supporting cast as well as composer Akimitsu Honma, and director Yumi Suzuki were present at the conference.[20][21] Daily practice for the musical began on November 18[10] and concluded on December 30.[22] It opened on January 5, 2016 at Theatre Creation in Tokyo, Japan. A press conference[23] and public practice was held before the opening.[3]

The Tokyo performances of the musical were met with a warm response.[24] The popularity allowed for two cast send-offs on January 19 and 21, 2016. Fans were allowed to take photos and shake hands with Matsushita, Shirasu, Kamiyama, Mackenyu, Kato, Kimura, Tamaki, and Furuhata.[25] The musical concluded its last Tokyo performance on January 24.[26] It ran for eight more performances in Fukuoka, Nagoya, and Osaka, before coming to a close on February 14.[2][3]

On September 19, 2015, Matsushita, Shirasu, Kamiyama, and Mackenyu made their first appearance as the F4 at the Tokyo Game Show to cross-promote Voltage's mobile game, Hana Yori Dango: F4 and First Kiss.[27][28] Tamaki also joined them for a short time at the venue.[29] Shirasu and Kamiyama made a special appearance at the Hibiya Chanter lighting ceremony on November 21.[30] Many of the cast members, including Kato and Matsushita, performed at the same venue for the Chanter Winter Fair on November 28.[31][32]

On November 27, Kato and several cast members performed at NHK Hall for the "Honma Festival 2015". The event was held in honor of the musical's composer Akimitsu Honma,[33] who also played at the festival.[34] Honma Festival aired as a television special on BS SKY PerfecTV! on December 26.[35] On December 21, Amesuta (アメスタ), (アメスタ), an app, broadcasted special performances by Kato, Matsushita, and Mackenyu for the general public.[36]

During the musical's run, Café Chapeau, located in the Hibiya Chanter building, provided a special menu. It consisted of four marron chantilly desserts, each modeled after a member of the F4.[37][38][39]

Kato, Matsushima, Shirasu, Kamiyama, and Mackenyu did their first interview together for Margaret's August 2015 issue.[40] They did follow-up interviews with Margaret in November and December. A front row ticket for the musical was also awarded to one of the magazine's readers.[41][42]

The cast continued giving interviews, mainly during December, in magazines such as YOUPAPER Stage, WiNK Up, and with.[43] Tomoko Ikuta, Kato, Matsushima, Shirasu, Kamiyama, and Mackenyu also appeared on television to promote the musical in December.[44]

Several items related to Hana Yori Dango: The Musical were available for purchase at the venue, including performance programs (with or without a postcard), autograph posters, etc. Regarding the autograph posters, only ten will be sold per performance.[65][66] Merchandise sales had different guidelines in each city.[67][68]

Tote bag
Add a photo to this gallery

A Korean adaptation of Hana Yori Dango: The Musical was announced in November 2016.[72] Yumi Suzuki returned to direct, along with Go Aoki as scriptwriter and Akimitsu Honma as composer. It premiered on February 24, 2017 in Seoul, South Korea at Hongik Daehangno Art Center.[73] The musical ran for eighty-eight performances, before ending on May 7.[74][75]

Retrieved from "https://boysoverflowers.fandom.com/wiki/Hana_Yori_Dango:_The_Musical?oldid=48820"
Community content is available under CC-BY-SA unless otherwise noted.