Boys Over Flowers Wiki
Register
Don't have an account?
Sign In
Advertisement
in: A to Z, Media, Television dramas, Hana Nochi Hare

The story takes place after Hana Yori Dango Final (2008).[2] Hana Sugisaki stars as the series' heroine, Oto Edogawa. Sho Hirano and Taishi Nakagawa play opposite her as Haruto Kaguragi and Tenma Hase.[4] Hana Nochi Hare premiered on April 17, 2018 on TBS[5] and concluded on June 26.[6] It was released on DVD in October 2018.[7]

Oto (Sugisaki) is a student at Eitoku Academy, which is now ruled by the C5. She keeps her "commoner" status a secret, so she may remain at school. One day, she and the C5's leader, Haruto (Hirano), learn each other's secret. After a bad first impression, the two become friends and Haruto falls for Oto. She, however, has a fiancé named Tenma (Nakagawa).

Oto Edogawa (Hana Sugisaki) has to keep her family's bankruptcy a secret from her classmates at Eitoku Academy. She avoids the C5, who "hunt" the school's poor students. After meeting Tsukasa Domyoji, Haruto Kaguragi (Sho Hirano) formed the C5 with his comrades Kaito Taira (Tatsuomi Hamada), Airi Maya (Mio Imada), Sugimaru Eibi (Keisuke Nakata), and Issa Narumiya (Jin Suzuki). One day, Haruto sees Oto at her part-time job and she learns about his secret hobby. He tries to intimidate her into leaving school, though she gets the upper hand by blackmailing him. Haruto then attempts to make her fall in love with him. Oto slaps him with a piece of meat, after he insults her friend and coworker, Arisa Konno (Haruka Kinami). Haruto chases after her and ends up saving her from a coworker.[8]

Oto later reveals to Haruto that staying at Eitoku is a condition of her arranged engagement to Tenma Hase (Taishi Nakagawa). In shock, Haruto insults Oto. The C5 later disguise themselves and sneak into Momonozono Academy, Eitoku's rival. They are quickly spotted, but Tenma, the student president, covers for them. After meeting Tenma, Haruto finds himself at Oto's work and he apologizes for earlier. The next morning, Haruto admits his feelings for Oto to Kaito.[9] Airi leaks to the whole school about Oto being a "commoner." Oto decides to quit, but the other students begin bullying her anyway. Tenma, having paid her tuition, arrives in time to save her. Haruto feels guilty and visits her at the hospital after receiving advice from Rui Hanazawa (Shun Oguri). Oto and Haruto become friends again.[10]

After apologizing, Airi asks Oto to be her friend and wins her over by telling her about her childhood. A few days later, Airi goes out with Oto and Haruto. She locks Oto into a walk-in freezer, in which she trapped Tenma earlier. Haruto rushes to help them and ends his friendship with Airi. Airi later goes missing. Oto finds her at an abandoned factory. Haruto, whom had acted unconcerned, arrives and carries Airi home.[11] At Issa's exhibit, Haruto meets Megumi Nishidome (Marie Iitoyo) in the onsen by accident. She visits Eitoku to return his wallet. Seeing them together makes Oto jealous and she refuses to listen to Haruto. Several days later, Oto goes on a date with Tenma. They run into Megumi, who asks if she can pursue Haruto. Oto says "Go right ahead." She later asks Tenma to be her official boyfriend.[12]

Megumi attempts to cheer up a depressed Haruto by taking him to an amusement park. There they happen to see Oto and Tenma. The two couples spend an uneasy day together, after Megumi suggests a double date. That night, Oto realizes that she has to settle things with Haruto in order to reassure Tenma. Haruto tells Oto that he loves her. She thanks him for being honest but restates that she is dating Tenma.[13] After being rejected, Haruto tries to focus on being the C5's leader and start "peasant hunts" again. Oto worries that she caused Haruto's change as she prepares to transfer to Momonozono. After a fight with his father (Kenichi Takito), she finds Haruto and reminds him to be himself. The next day, he makes an impassioned speech to his classmates, deciding to quit "peasant hunts."[14]

After Eitoku is vandalized, Haruto decides to seriously consider dating Megumi and starts planning her birthday party. Meanwhile, Tenma's parents Kazuma (Tet Wada) and Rie Hase (Saki Takaoka) are convinced that he is being treated poorly by Oto. They arrange a dinner to talk things out. Oto has to leave it to warn the C5 about the vandal being at Megumi's party. Haruto later explains what happened to Tenma's parents.[15] The next day, a stranger attacks Oto with mace. She later learns that Tenma's friend Jin Konoe (Riku Kashima) is behind all of the attacks on Eitoku. Tenma thinks she is mistaken, but Haruto believes her. Tenma later confronts Haruto, who admits that he has not given up on Oto. Haruto's father witnesses his son's attempts to fight Tenma and proposes a competition between the two.[16]

Oto realizes that she has feelings for Haruto, but decides to stay with Tenma. Nevertheless, she becomes upset with the C5, whom do not believe Haruto has a chance against Tenma. They are moved by her words to support him and later recruit the help of Sojiro Nishikado (Shota Matsuda). Meanwhile, Megumi struggles with her emotions since Haruto has to stay with her if he loses per his father's conditions.[17] After losing the first round, Haruto pulls a surprise win in the second. Megumi makes up her mind to support him and breaks up with him. Haruto ultimately wins the whole competition, earning some approval from his father. Tenma later ends his engagement with Oto and encourages her to "follow [her] feelings." Oto then rushes toward Yebisu Garden Place, where Haruto had promised to wait for her.[18] 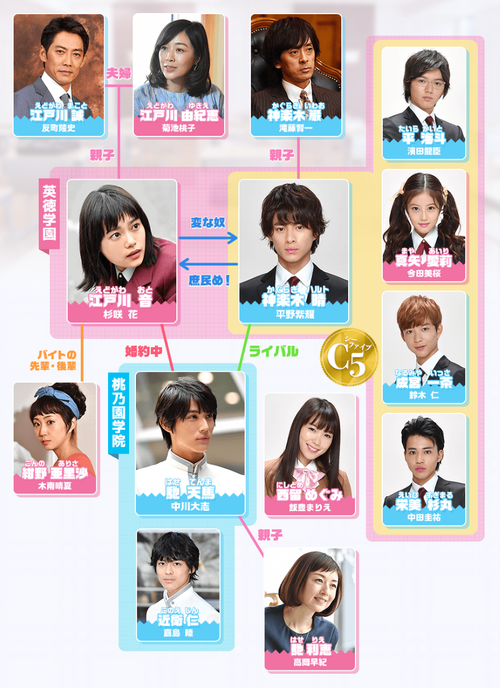 Auditions for various supporting roles were held on January 28, 2018,[38] while wardrobe fittings began on February 9.[39] The Correct 5's jackets were made by the French company, Dormeuil.[40] On February 17, Tatsuomi Hamada, Marie Iitoyo, Mio Imada, Jin Suzuki, and Keisuke Nakata were added to the cast.[41] Shooting begin in late February. Some of the locations were also used for Hana Yori Dango, notably Yebisu Garden Place.[42]

In August 2019, the series was made available to rent on the Japanese service Paravi.[48] It was one of several shows available for free on Paravi in response to school closures during the 2020 coronavirus pandemic.[49] In mid-2021, it was available for free again to celebrate Hirano's role in Kaguya-sama: Love Is War Final.[50]

An official Twitter account and web page for Hana Nochi Hare was created on January 23, 2018.[51][52] On February 16, an Instagram account was launched under the username, "oto_edogawa". It is also referred to as "Oto Gram" (, "Oto Gram") and Sugisaki was in charge of taking many of the photos.[53] Later in February, the drama's "crank-in", signifying the start of filming, was covered by several news outlets, such as Yahoo! Japan[54] and Model Press.[55]

Sugisaki, Nakagawa, and Iitoyo walked the runway at the Tokyo Girls Collection (TGC) show on March 31, 2018.[56] On April 7, a special preview of Hana Nochi Hare was shown. Over 10,000 people applied to attend, but only 200 were selected. The stars of the drama walked the red carpet, before the preview.[57]

Hirano and Nakagawa were interviewed in the April issue of TVfan Cross.[63] Sugisaki and Hirano graced the cover of Weekly The Television on April 4.[64] Jun Matsumoto and Mao Inoue previously appeared on the cover together to promote Hana Yori Dango.[65] Sugisaki, Hirano, and Nakagawa were interviewed for Margaret's 2000th issue, which also featured a special chapter of Boys Over Flowers.[66] Nakagawa, Hirano, Hamada, Suzuki, and Nakata modeled for the May 2018 issue of Men's Non-no. Suzuki and Nakata, who are exclusive models for the magazine, were interviewed. Kamio also provided new illustrations.[67]

Hana Nochi Hare was released on DVD and blu-ray on October 26, 2018.[7][68] To commemorate the release, an exhibit was held at HMV&Books Shibuya from October 25 to November 7.[69] The main characters costumes were among the items on display.[70] 90,000 copies of the DVD and 70,000 of the blu-ray were sold during its first week of release. It was ranked third on Oricon's DVD charts and seventh on the blu-ray charts. The DVD and blu-ray both ranked first in the drama category.[71]

TBS released a few items for Hana Nochi Hare for a limited time, including a replica of the gold pig charm. It sold for ¥2,200. Other objects include folders for Eitoku and Momonozono Academy, a set of two key-chains modeled after Oto and Haruto's uniforms, and a box of cookies.[78] Additionally, a bear key-chain is included with the purchase of the DVD or blu-ray box set from TBS's website.[79]