Boys Over Flowers Wiki
Register
Don't have an account?
Sign In
Advertisement
in: A to Z, Music, Singles, Hana Nochi Hare

"Cinderella Girl" (, "Cinderella Girl") is the debut single of King & Prince. It served as the theme song to Hana Nochi Hare: Hanadan Next Season, which Sho Hirano is starred in. The single was released on May 23, 2018.[1] It was the first single for Johnny's Universe, a new label formed by Johnny & Associates and Universal Music.[2]

King & Prince first performed the song on March 15, 2018 at a fan event.[3] Later that month, they performed it on "CDTV Special! Graduation Song Music Festival", where it was revealed to be the theme song for Hana Nochi Hare: Hanadan Next Season, a drama starring Sho Hirano. Costars Hana Sugisaki and Taishi Nakagawa also joined the program to talk about the show and to cheer on Hirano.[4] A music video for the song was published on May 7, 2018.[5]

The single was released in three different specifications, including Limited A, Limited B, and Normal. "Cinderella Girl" and "Funk it up" were featured on all of the editions. "You Wanted!" was on the Normal version only. The music video for "Cinderella Girl" was featured on the Limited A, while Limited B housed a "Making of" featurette among other bonus material. A poster was also given to customers.[6]

To commemorate the release of the single, King & Prince hosted a "Talk and High-five Event". It took place at Toyosu Pit in Tokyo on June 20, 2018 and at Zepp Namba in Osaka on June 27. Ten thousand people were chosen to attend via a lottery.[7] 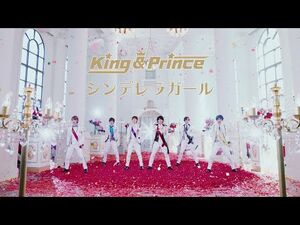