Boys Over Flowers Photo & Music Book (꽃보다 남자 포토악보집) are two books containing sheet music from the first and second soundtracks of the drama, Boys Over Flowers. They both feature photos from the drama and also include a CD. The books were published by Music Tree on March 14 and March 28, 2009.

The sheet music is arranged into piano and guitar chords.[3] 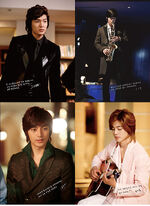