Boys Over Flowers Wiki
Register
Don't have an account?
Sign In
Advertisement
in: A to Z, Music, Singles

"BABY'S GROWING UP" (ベイビーズ グローイング アップ) is the fourth single of Japanese idol, Yuki Uchida. It served as the theme song for Hana Yori Dango (1995), a film also starring Uchida. Another song, titled "Nineteen," was also included on the single.

It was released by King Records on August 19, 1995 in Japan and reached #5 on the Oricon charts. Both songs on the single were written and composed by Tetsuya Komuro.

Uchida included the slow version of "Baby's Growing Up to her second studio album, Mi-Chemin (1995). The regular version was also included in the compilation albums, Present (1997) and Uchida Yuki Perfect Best (2010).

A music video was created for "Baby's Growing Up." In it Uchida plays a young delinquent. She is first shown in a prison cell, before being taken through a crowd onto a bus. She manages to escape and runs to freedom by the end of the video. 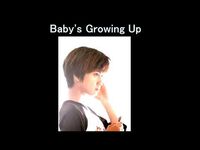