Boys Over Flowers Wiki
Register
Don't have an account?
Sign In
Advertisement
in: A to Z, Real events

Animate Girls Festival (, Animate Girls Festival), abbreviated AGF, is a yearly event held in Japan. It has a focus on otome games, anime, boys' love comics, food, and cosplay. In 2015, the event was held at Sunshine City in Ikebukuro on November 7 and 8. The site of the event was expanded that year, encompassing more of Ikebukuro. Their cosplay event, "Acosta! in AGF" returned.[1][2][3]

Voltage announced on October 30, 2015 that a booth for their otome app, Hana Yori Dango: F4 and First Kiss would be present at the event.[4] Special merchandise of the game was sold at the event. Some items related to Boys Over Flowers Season 2, which was being published at the time, were also available.[3] 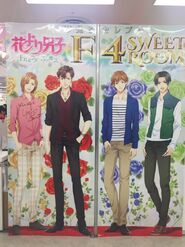 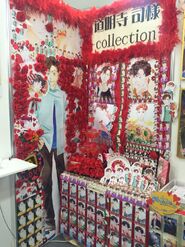 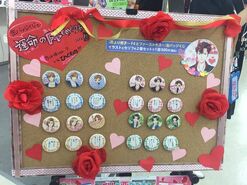 The booth was called "~Celebrity Dream~ "F4" Sweet Room" (, "~Celebrity Dream~ "F4" Sweet Room")[5] and featured a large life-size panel of the F4. One corner of the booth was dedicated to the F4 leader, Tsukasa Domyoji in particular.[6] Limited items of Hana Yori Dango: F4 and First Kiss and Boys Over Flowers Season 2 were also available for purchase.[7]