What's on your mind?

Anybody remember when they leaked a picture of the child actors last year? Well I've finally learned all five of their names:

All five are basically new actors. Kuma has interestingly worked with Fah before. Third is the youngest, being born in 2016, which now makes him the youngest actor on the whole wiki. He was also the hardest to find his last name (It took so long T_T). Onew is mainly an influencer (over 200k followers on Instagram!) and this appears to be her first drama. I gave up finding her first and last name. Likely her parents don't want that information out there.

This is my favorite kind of project on the wiki. It took a lot of searching social media, but I was happy once the pages were all *mostly* completed. I've really enjoyed creating pages for the past child actors from the other series. For instance, Snoopy Yu, the only child actor from Meteor Garden, is 27! Boys Over Flowers is quite old now haha.

I have just found my favorite piece of fan art relating to Boys Over Flowers. Of course, I've seen a lot of BOF fan art. But this piece represents the part of BOF I love the most, seeing all of the different versions!

I was really surprised by the musical representation, especially the Korean one. I wonder how they chose J-Min and Lee Chang-sub since it was triple casted haha. The characters are all cute, but I think 2005 is my favorite! 2018 is definitely the funniest :)

Merry Christmas, everyone! Episode 2 of F4 Thailand aired today, but unfortunately episode 3 will not air next Saturday. GMMTV has delayed some of their shows, including Bad Buddy, for the New Years' celebrations. Episode 3 will instead air on January 8.

Someone posted a character chart of F4 Thailand from a Japanese magazine, revealing some more character names and confirming some roles. 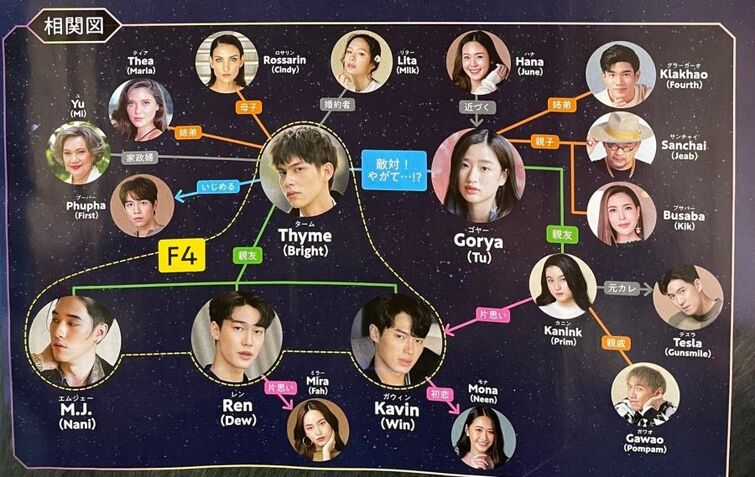 Image has been cropped; credit to who posted it (I couldn't find the original source).

I also changed a few character name spellings based on those given in the chart, namely Gawao and Busaba. I've decided to keep Rosaryn and Kaning since their English spellings were confirmed before. If it's different when F4 Thailand airs, then I'll change it. Also, I didn't change Payu to Yu because that'll create a conflict with other pages. I'll hold off for further confirmation on that one.

Lastly, the following characters aren't clear on their counterparts:

Hana was one of the earliest named characters, which means she's definitely important. So the most likely candidate is Sakurako. As for Gawao, Gorya's boss at whatever shop she works at, probably?

From this chart, I think it's pretty clear what arcs they are covering. As the series is only 16 episodes, it's likely that most of the manga will be cut. We'll have to wait until the ending to even guess if there'll be a 2nd season, but right now I think it's not likely.

In conclusion, I can't wait to watch and see how everything plays out!

Set your calendars! F4 Thailand will begin airing on December 18! It will air every Saturday at 8:30 PM, That's Bangkok time, of course, so find out what time zone you're in. As per GMMTV's usual practices, I believe we can expect F4 Thailand to be released on YouTube with English subtitles a couple hours after it first airs. Otherwise, I believe it will be airing in quite a few Asian countries. Check out this page for more. 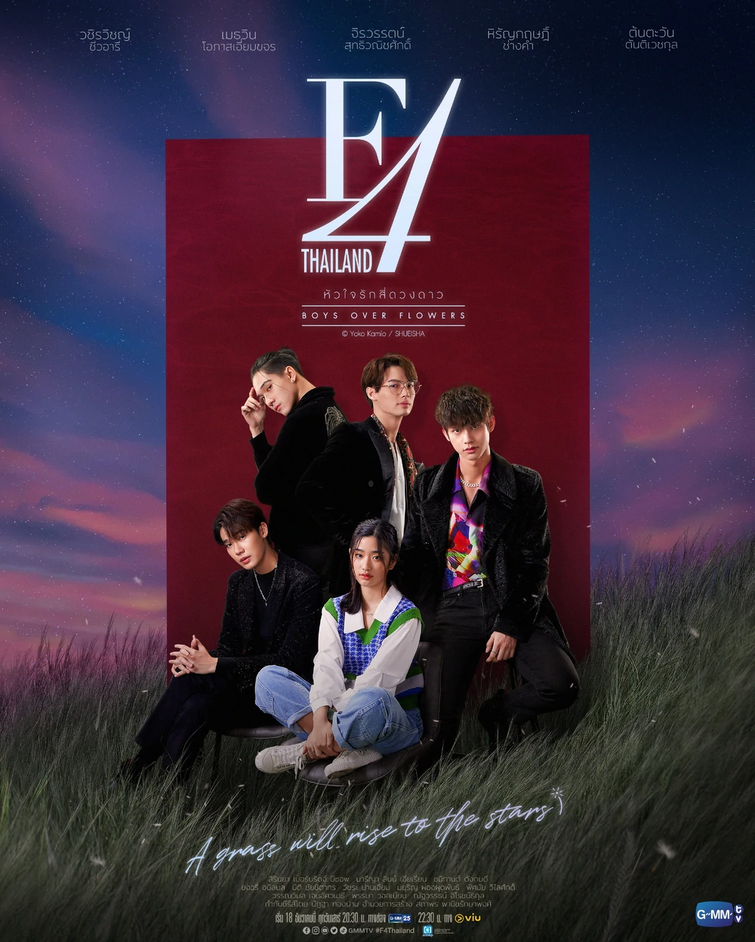 I'm really excited for this latest version! Just look at the poster! Anyway, check out the official trailer if you haven't yet! And look at the wiki page for the latest information. 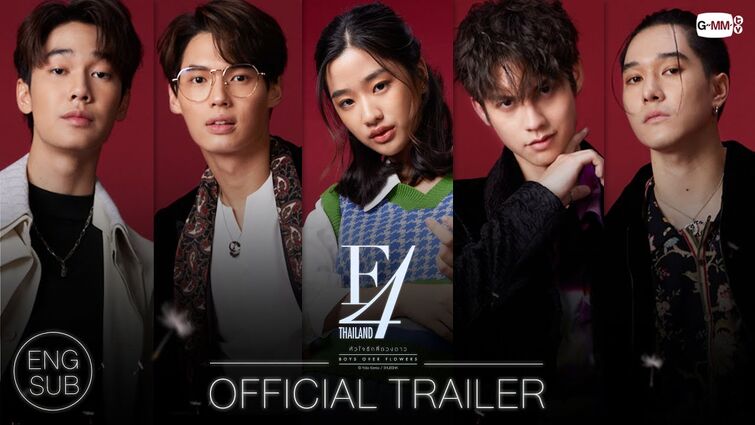 I've heard rumblings about the couple earlier this year, but I thought they had worked pass their issues. Though I'm sure it's for the best, I feel bad for Barbie. From what I read about her pass relationships, Barbie has always been really focused on marriage and family. Nevertheless, I hopes she finds her version of happiness in the future!

This is also the third major cast divorce I've seen since I started the wiki. First, Vanness Wu and then Ku Hye-sun. I would joke that the female lead role is cursed, but it seems most of the women who played Tsukushi are not married while all three of her voice actors seem very happily married.

Last year, I remember wondering who the man standing fourth from the left was. 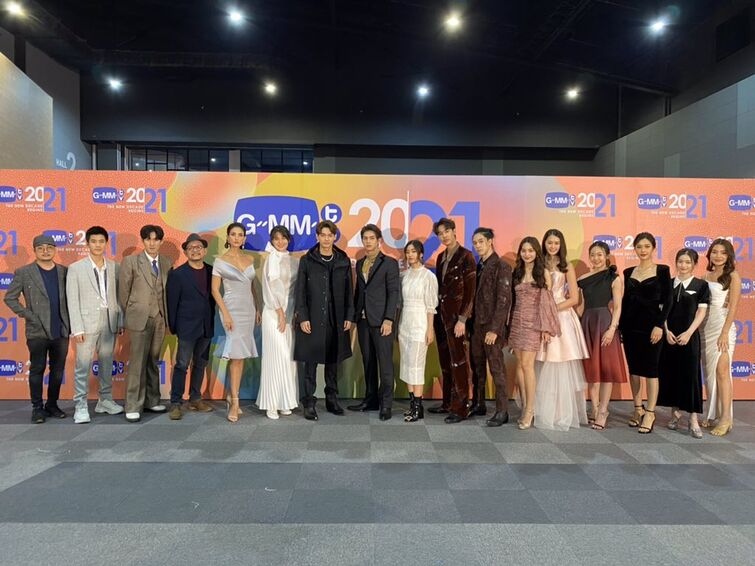 Well, now I finally know! His name is Jeab Wachara Pan-iom (sometimes spelled Watchara Pan-iam), a Thai actor and musician. Before I speculated that he was a producer or something and didn't think much about him, but now I think it's pretty clear that he's one of the actors. Additionally, Pompam Niti Chaichitathorn will also be appearing in F4 Thailand.

I have this Twitter thread to thank for translating "The New Decade Begins" conference from last year. I then cross referenced GMMTV's press release, which also names Jeab and Pompam. I'm unsure how I missed their names last year, but we have them now.

(P.S. I wonder what roles they are playing?)

Welcome to the wiki! Anyone can contribute to this wiki, but as always please read our policies first.

This new Discussions feature has been added to the wiki as of November 9, 2021. Feel free to talk about anything related to Boys Over Flowers! This includes the manga or any adaptations, as well as tertiary subjects such as actors or music. However, any discussions that get too off-topic will be deleted or locked. Please read the rest of the guidelines before posting and make sure to add your post to the right category.